Discuss DVDs and Blu-rays released by Eureka/Masters of Cinema and the films on them. If it's got a spine number, it's in here.
Forum rules
Please do not clutter up the threads for MoC titles with information on pre-orders. You can announce the availability of pre-orders in the MoC: Cheapest Prices / Best Places to Buy / Pre-Orders thread. Any posts on pre-orders in any other thread will be deleted.
Post Reply
5 posts • Page 1 of 1
Message
Author 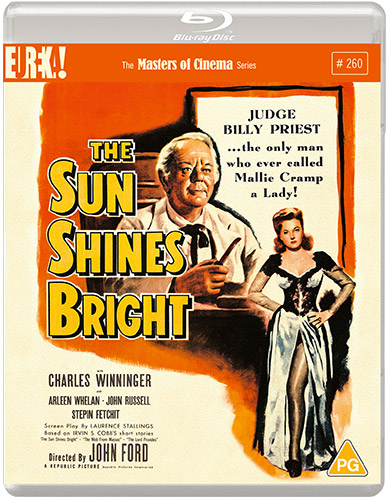 Fantastic news. I wonder if Olive will magically reappear with a signature edition at some point.
Top

The notoriously difficult to please John Ford regarded The Sun Shines Bright as his favourite film. Based on material from Irvin S. Cobb’s “Judge Priest” short stories, Ford had previously directed the 1934 film Judge Priest starring Will Rogers, but was unsatisfied with the handling of the film by 20th Century Fox – specifically their decision to cut a vital scene depicting the main character condemning an attempted lynching. Two decades later he chose to revisit the material for Republic Pictures, and the result was yet another masterpiece from the great director.

Set in 1905 Kentucky, Judge Priest (Charles Winninger) is fighting for reelection against a Yankee prosecutor (Milburn Stone). Despite the Judge’s popularity, his generosity and sense of justice may cost him the election.

The Sun Shines Bright almost shared a similar fate as Judge Priest, with ten minutes of footage being removed by Republic Pictures. Fortunately the original uncut master was not destroyed, and has now been fully restored and makes its UK debut on Blu-ray as part of the Masters of Cinema series.

Great to see this finally get the release I hoped that Olive would give us back in the day. It is a shame that Eureka haven't seen fit to include the theatrical cut for posterity though.
Top

I know the Olive disc also uses the uncut version (and perhaps MoC will be a better encode of the same master - the Olive BD is a single-layer disc), but what was in the ten minutes that was cut?
Top

You can watch a shorter cut of the film on YouTube that is presumably the original theatrical version (I won't link to it here because I'm unsure about the legality). It looks like most of the cut material was from the beginning. In this shorter version, the movie basically opens with John Russell's entrance.
Top
Post Reply
5 posts • Page 1 of 1

Return to “The Masters of Cinema Series”