An ongoing survey of the Criterion Forum membership to create lists of the best films of each decade and genre.
Post Reply
256 posts
Message
Author

SpoilerShow
I read it that way too initially but then I remembered that Dussollier‘s description in the woods of how she disappeared seemed alien, though I’m sure you’re right and if I went back and rewatched the end it would be more ambiguous. (It’s not within my character to take anything at face value so something must be up here)

The train ride itself subverts any expected romanticism or philosophical catharsis that only adds to the banal ‘realism’ to contrast her memory of that train observation of another woman’s emotion. Of course she’s unconscious for her own moment here, and perhaps this hits on actuality failing to live up to the self-imposed fabrication of significance assigned in processing memories.

I did like how Dussollier’s desperation to believe at the end is hidden underneath his passivity and isn’t “desperate” in the way it’s normally defined; instead his own emotional gravity moves him gently towards the only stable option on a semi-conscious level wherein he chooses to believe her because it affirms his own connotation of her worth and their connection, rendering any objective mental illness meaningless.

Mostly I just struggled to engage with either character enough to invest there, and I think that’s really due to the wavering personalities throughout the first hour but the ideas really do lift this into a special place especially that final moment in the woods as a quiet crescendo. I’ll look forward to revisiting this for the sci-fi project, as it’s a very corporeal meditative take on the concepts which alone give it an edge for me in twisting the aims of the genre back to ground zero.
Top 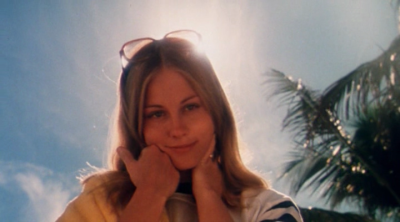 I haven't seen this since I was in my early 20s, at a time when I was much less in tune with acknowledging the reflection Grodin's character casts in the audience, as well as more leisurely coasting through life ready to 'deal' with the Lilas of the world no questions asked. Revisiting this in my 30s is a bizarre combination of soul-destroying and cathartic, witnessing deeply uncomfortable behavior yet validating its truth. May captures the tone of comedy through a straight-demonstration of clashing selfish actions as products of relatable predicaments, and her neutrality for the sake of laughing at life is not wholly sneering but laughing both with and at humanity.

The unmasking comes in gradual, at times painfully slow methodology, but can also feel sharply forced, and May's intentions are complex in validating the behaviors as well as one's shame for the behaviors! It's a grey picture that is inclusive of the awfulness as just as natural as hating oneself for unveiling the defenses keeping us from seeing this selfish side of us. I didn't relate to any character on a literal level, but this film triggers that selfish component that lashes out internally or externally, resents, tells white lies or outright lies without realizing it, talks about or listens to talk about someone behind their back, and goes on the offensive to protect oneself from surrendering their shell to acknowledge what's really going on.

Most of all, this is a film for everyone who has been in a relationship and knew it was doomed but could not dare accept it, just as it is for the person who thinks the next girl is 'the one,' doomed to repeat the cycle all over again; or the person who enjoys being sought so much that they cannot realize the harm or reality of the person on the other end. Grodin is magnificent as the typical average 'nice' guy who emerges as just as much of an asshole as everybody else (What a view of our cores as inherently selfish- My kind of movie!) Berlin walks a fine line between a figure we want to shut the door on too, but also feel incredible sympathy for, standing for a reminder of the sobering reveal that occurs when the blindness of love fades. Shepherd's bewitching vamp is also complicated in how we watch her nonverbal communication, even when blurred in the background of a scene, always hypervigilant of the emotions she's manipulating whether directly or watching an interaction play out for thrills.

All three characters are completely equal in their self-indulgent goals, always at odds with one another. Berlin wants her husband to be around her all the time and accept her quirks without imposing an identity of his own, Grodin wants to chase- to obtain a person's affection to feel special- before inevitably getting bored, and Shepherd wants to control others from an aloof state for personal amusement. Each wants power and unconditional devotion on their terms, and a part of each's quirk is in most people in some small, broad form. The empathy lands too because none of these people are even aware of their issues: Berlin cannot see her problematic positioning, Grodin cannot see that he is doomed to hunt, and Shepherd eventually translates her attraction to puppeteering to sexual attraction for the partner rather than the act! I've long said that being in a relationship is the most insane thing we do as people- for we bare our vulnerabilities around another human being with a different perspective and selfish agenda and expect to align. This is a film that says, yep that's crazy, we're gonna keep doing it anyways, and it's pathetically -and honestly- funny!
Top

Rewatching Bachelorette, the humor still clicked though I was more conscious of how the dark elements helped authenticate the imperfections in adult friends, by displaying their surface-level flaws only to reveal them as defense mechanisms to push away, or cover up, from the more universal pains we can identify with. The scene where Caplan and Scott cry on the bed goes for broke and earns its impact, but my favorite moment is one that actually twists traditional cinematic sexual politics in a subtle way. When Fisher and Bornheimer are smoking and she says she's self-conscious about not being smart, his response is a classic 'movie-nice-guy' line that speaks an ounce of truth, but after she returns by stating that she didn't understand his philosophical verbal affirmation, he admits "neither did I." It's a genius addition that cements an equality in a film that only a woman could have made, because Bornheimer isn't allowed to self-actualize her. His 'line' is made transparent to be a supportive gesture with shreds of wisdom, and certainly well-meaning.. but also, well, a line. Not a soliloquy from a gatekeeper to ignite her resurgence, but instead this is left to his kindness, and the unconditional action that speaks louder than words. Dunst has the toughest part, pulling off the role of your typical stone-cold-b*itch as ultimately sympathetic without compromising her character. All around a great comedy, and one that's far more unnerving than one might expect- especially if anyone says, "It's like Bridesmaids" though I think that part of why this one is harder for some to like is that its characters too damn real, and not many people want to see these parts of themselves on the screen.
Top 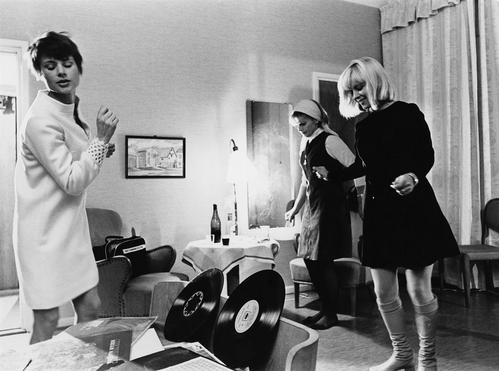 What a lovely, bizarre experimental narrative on complex femininity. Zetterling beautifully implements a nouvelle vague style to convey the tribulations drawing even the most self-fulfilled women back into the world of men, as well as to formally express their loose playfulness which becomes a continual reminder of resiliency. The technical choices blur the line between dream, memory, imagination and reality, all of which hold equally significant weight, but the filmmaker also professes that these imposed burdens from the conjunction of the self and society can be traversed, alleviated, embraced, and assigned subjective value as part of the practice of female empowerment. For example, Bibi's hosts' internal monologues are an odd insert in giving them first-person narration. Are they her anxious projections or the reality of behavior interpreted from the outside? Either way she’s left simultaneously unaffected in continuing to chat away, greeting them with compassion, and being her authentic self - and yet she is also clearly poisoned with self-consciousness when they leave. This conflict delivers information of personal disharmony in minor bouts of private despair, and showcases the ability to assert the self in harmony by overcoming ennui, at the same time.

This duality extends to all three of the women, who are in cyclical fluxes of being inescapably drawn to and repelled by men, and have a complicated relationship with their own responses to this magnetism. Running away from a man helplessly in the snow, trying to flee a life tied to him, is juxtaposed with a joyous mattress shopping scene where they cannot help but spill their playful bedroom intimacy out into the public world, confidently without embarrassment. Who is who across these scenes is unimportant, as evidenced by the obscure editing, but the aura of contradictions evaporates into a universality that drives enigmatic emotional unity. The friction of their desires for connection with those for independent self-esteem, and the lack of clarity in processing these contrasting needs, is emphasized by the elliptical formalism to construct a narrative that is fluid in its internal logic but not a typically sensical display.

The tv interview the girls do, where they laugh at the contradictions they spew in trying to explain the play, is a summation of what this film is, and what their lives are- impossible to pin down, but sobering in both its truth of unavoidable malaise and the equal truth that one can escape into harmony with oneself far more than they think. Most of all this was incredibly fun, spirited, and tenderly atmospheric. I don’t know if I can definitively call this the best feminist film I’ve ever seen, but the self-reflexive nature, the exposition of foggy terrain that women traverse daily in being torn between their deeply-ingrained gender roles, biological drives, and will to be free of these constraints- as well as trying to decipher what “free” means, and if, or how, that definition can shift to exclude men without guilt- are all cause for its candidacy.

Though it’s the places this goes and where it ultimately leads us that seals the deal and is cause for celebration. We land in self-actualized rhapsody, and while still within the confines of society, Bibi’s final act bleeds the play’s independence into real life and allows the joke to become serious in part without being wholly one tone- much like the tv interview banter sets the stage for thematically. The action isn't sourced in specificity, but in the refusal to remain stuck in the murky waters of prolonged consideration, taking a tangible action and embracing it. Regardless of the pros and cons, the liberation is in the choice itself to trust the gut, divorced from the details of the act to follow. I loved this film, which deconstructs femininity void of any purpose of evaluation, instead as a necessary step to reconstruct the experience back into a stronger energy, and as proof of worthy emancipation, not for us as social observers but for the women themselves.
Top

For a second, I misread this as "Women Pictures List Discussion," but that could be an interesting one to do. (Amusingly, the best directors that come to mind are all men: George Cukor, Douglas Sirk, Max Ophüls, Josef von Sternberg, Todd Haynes, Delmer Daves in his later years...)
Top

Return to “The Lists Project”